What is a combination wave?

Combination waves generator or surges Generators are typically benchtop pieces of equipment that weigh a lot. Ground planes with links to the earth are needed for the safe operation of a transient generator in electromagnetic test settings. Testing three-phase power line systems necessitate more extensive coupling/decoupling networks, which significantly increases the overall size of the system.

A surge generator is a transient immunity test device that generates brief, high-voltage surges to determine the system’s overall immunity. It is possible to divide surge generators into two types: impulse voltage generators and impulse current generators. High impulsive currents are required to perform tests on various equipment, including lightning arresters, plasma devices, and equipment used in thermonuclear fusion, among other things.

Electrical substations must continue to supply power even in difficult situations such as lightning strikes. Thus eliminating sources of EMI in product design and attaining EMC compliance is critical. Combination wave generators offer a variety of output voltage ranges that are suitable for various testing applications. During a power outage, surge voltages and currents may reach many thousands of volts and several thousands of amps, respectively. 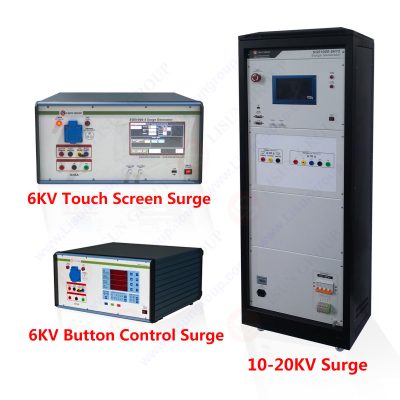 Overvoltages are the most common source of damage in industrial electronic systems. They may be produced either by switching movements in the equipment itself or by atmospheric discharges such as lightning, which can cause damage. The transfer impedance of the interference source is low if it is in the same circuit as the electronic equipment, and the impulse takes on the form of a current when it is in this circuit.

Surge Transients
Lightning strikes and electrical switching are both familiar sources of surge pulse or combo wave transients, as are other types of transients. An electrical surge transient may be caused by a lightning strike, whether the impact occurs directly on an electrical system or travels indirectly via wire. LISUN has the best surge generators in the market. Here these devices are built under the supervision of top engineers and technicians. That’s why LISUN is considered one of the best electrical equipment manufacturers in the world.

It is possible to produce electrical switching transients if the connected loads are changed due to insulation failure or other miscellaneous defects. It may also occur when one load is turned on, and the fault causes a surge of energy to spread to other devices.