The Main Differences Between Lighting test Standard CISPR 15: 2018 and 2013 Versions

There are many customers feedback that their LED luminaires can’t pass CE Certificate EMI Radiation Test (30-300MHz) in 2019 year but it is the same one can be passed last year. Why this happen? The main reason is the new EMI test standard were updated to CISPR15:2018. The EMI Test is the most important and difficult to test for the LED luminaires. This article LISUN engineer will take us to study the new standard CISPR15:2018 comparing to CISPR15:2013. 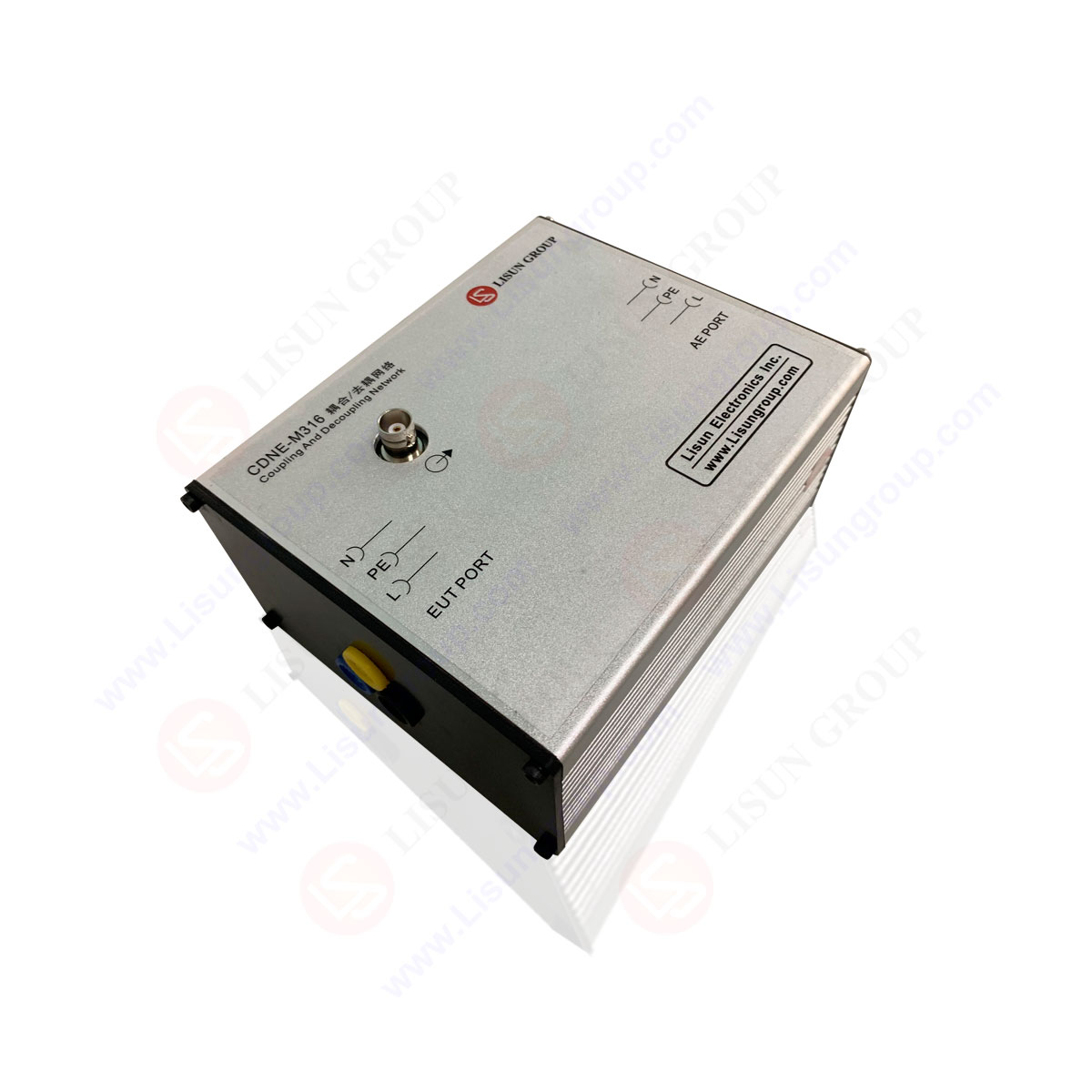 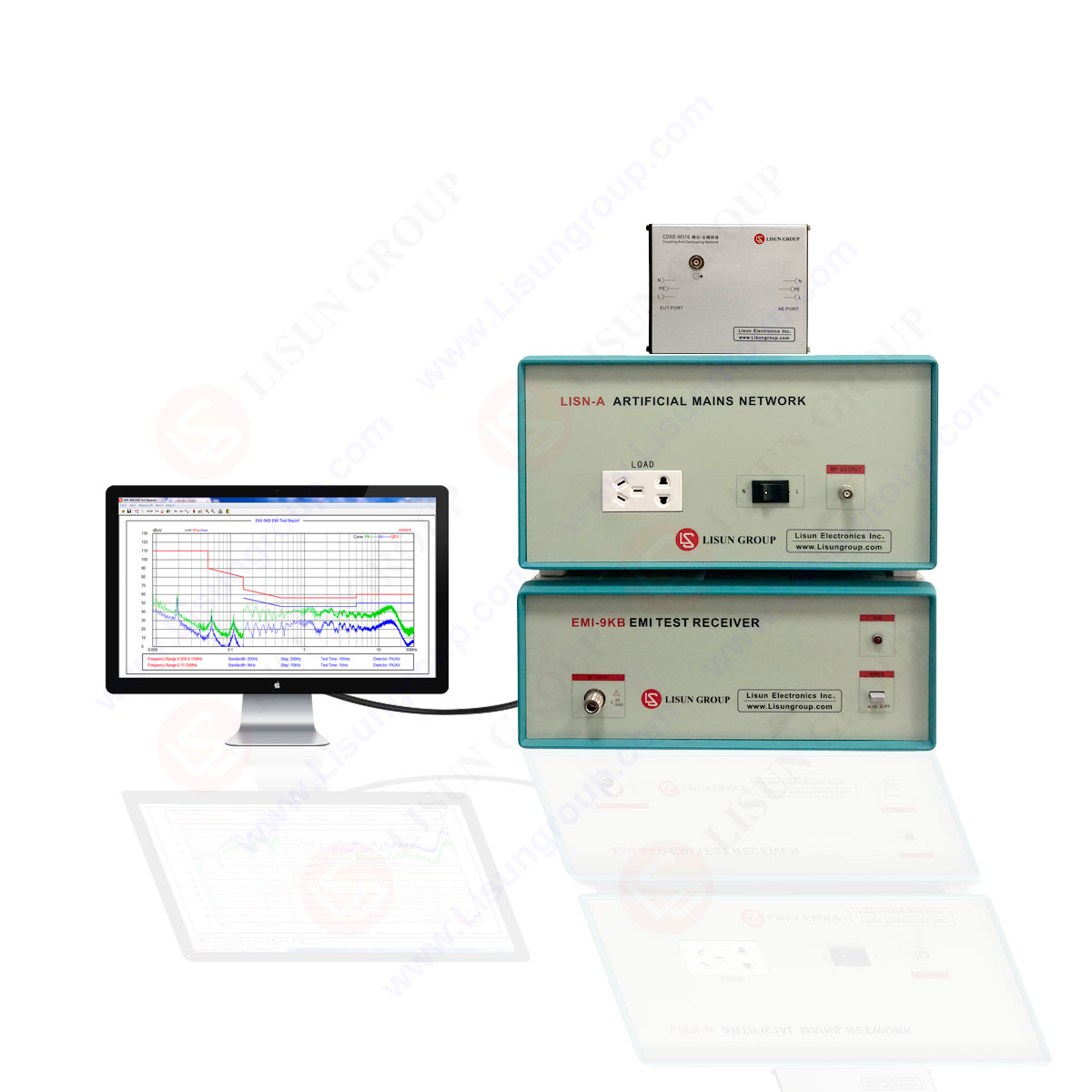 The latest version of the international standard for lighting equipment CISPR 15: 2018 has been released on February 16, 2018. Please click the below to download the new standard:

1.  Removed the insertion loss test requirements and the original related Appendix A;

3. Made the following changes for the conduction interference value of the wired network interfaces (Check details from the standard Table2 & Table3):

A: Name is updated by the control terminal to wired network interfaces;
B: Increased the limit for testing using current probe, and it is clearly stated that as long as the disturbance current or disturbance voltage is satisfied, the conduction interference of the effective network interface can be considered to meet the standard requirements;

4. The following changes were made to the conduction interference limits of the local wired interfaces (Check details from the standard Table5 & Table6). 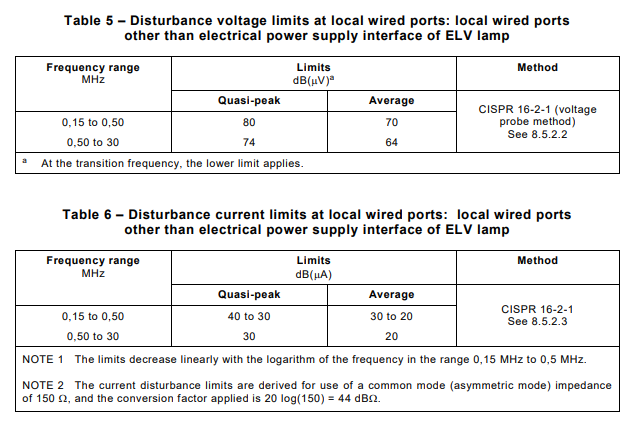 A: Name is updated by the load terminal to local wired ports;
B: Increased the limit for testing using current probe, and it is clearly stated that as long as the disturbance current or disturbance voltage is satisfied, the conduction interference of the local wired portscan be considered to meet the standard requirements;

6. Specifies if use the CDN method to evaluate Radiated-field disturbance measurements, the internal working frequency of the product must be ≤ 30MHz, and the product size should be controlled within3m*1m*1m (Length*Width*Height).

7. The limit (QP/ Quasi-peak) of the CDNE method is more strict;

8. The test layout of the CDNE method:

10. Space Radiated-field disturbance layout, adding a CDNE to power the EUT to be tested: 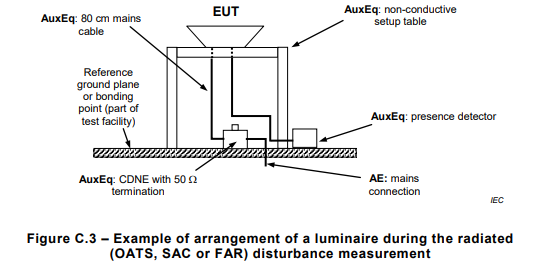 11. For the loop antenna Radiated-field disturbance measurements, added that new product with size of >1.6m can be tested according to the method in CISPR16-1-4: Test in a 3m environment using a 60cm loop antenna in an open field or a half-wave dark room. This test method can replace the loop antenna test of 3m and 4m size;

The limits of this test method are as follows (QP/quasi-peak):

12. The aperture of the conical housing panel has been changed as follows: 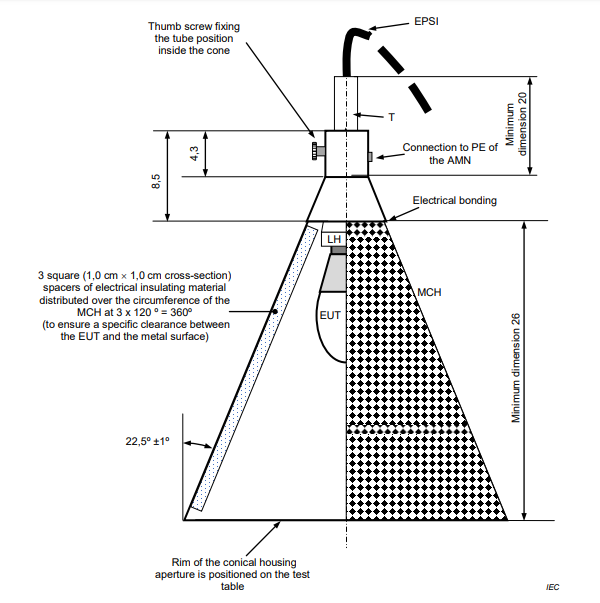 13. For self-ballasted lamp using the GU10 bayonet cap, the conical housing or the bayonet cap itself must be connected to PE of the AMN during the conducted disturbance measurements, as shown in the following manner:

14. Corrected the aging time required for testing some of the luminaires, and clearly specified that the luminaires using LED/OLED technology, no aging requirements before testing.