IEC 61000-4-5 is part of the IEC 61000 series, which describes surge immunity testing caused by over-voltages from switching and lightning transients. The second edition of IEC 61000-4-5 was released in 2005 and has been in use for many years. The third edition was released as an EN standard in 2014. The general philosophy of the third edition is unchanged from the second edition. However there have been a number of refinements to the standard: additional explanation to clear up ambiguities, new descriptions that were not included in the second edition, and new (informative) Annexes that can be used to help in the application of the standard.

The purpose of this article is to outline the changes and additions that are now part of IEC 61000-4-5 3rd edition.

Transition from the second edition to the third edition is already taking place within the EU according to the following dates:19 Mar. 2015 – Date of Publication (dop): The third edition has to be implemented by publication of an identical national standard by CENELEC member countries.

19 June 2017 – Date of Withdrawal (dow): National standards that conflict with the third edition must be withdrawn (i.e. the second edition can no longer be used).

One simple, seemingly benign addition to the third edition was to add a definition for “duration”: actually three definitions because one voltage waveform duration and two current waveform durations have been defined. This changes how the time of the waveforms are measured, and may have a significant impact on the equipment used to perform some tests. The change most greatly impacts the 8x20uS short-circuit current waveform. Figures 1 and 2 compare the measurement from the 2nd and 3rd editions of the standard. Compare T2 in the second edition to Tw and Td in the third edition. Another important change to the impulse waveform is that the 1.2×50/8×20 μs wave shape must be within the limits of the standard when the impulse is applied through a Coupling-Decoupling Network (CDN); specifically the 18μF coupling capacitor. While the open-circuit voltage waveform is not affected, the 8×20 μs short-circuit current wave shape will be significantly distorted by the addition of the 18μF capacitor, and the peak output current will be reduced by approx. 10% (depending on the design of the impulse generator). Figure 3 illustrates the problem: the normalized short-circuit output current of a nominal impulse generator is plotted against the same generator output into a 18μF capacitor. With the addition of the 18μF capacitor the peak current is significantly lower, and the waveform duration is shorter. In the second edition, calibration of the 1.2×50/8×20 μs generator was described in section 6.1.2. In the third edition this is covered in section 6.2.3, and additional details have been added. The updates provide clarification regarding the type of equipment that should be used to perform calibrations, including specifications for current transformers (if used to measure short-circuit current). Similar details have been included in Annex A regarding the 10×700 μs impulse waveform. Section 6.2.3 also makes reference to Annexes E and G of the standard (both are new in the third edition). Annex E is quite useful, as it includes many figures that show the various waveform measurements in detail (rise and duration) for all of the waveforms.

Other Updates and Clarifications

For AC equipment, impulses are applied at 0, 90, 180, and 270-degree phase angles. The third edition provides some clarification for testing three-phase equipment: the phase angle is measured between the two Lines being tested (not Line to Neutral). Also, the new edition points out that when testing from Neutral to Ground, phase matching is not needed (because there should be no voltage from Neutral to Ground) and so this test should be treated similar to DC testing (five positive impulses and five negative impulses).

In summary, the changes in the third edition of IEC 61000-4-5 are likely to impact any organization that performs impulse testing or calibrates impulse test equipment.

Manufacturers of products that are tested to the second edition will most likely not require any product redesign, as the actual impulse tests are relatively unchanged. The third edition should result in a more consistent application of impulse testing, and greater repeatability of test results.

LISUN SG61000-5 Surge Generator is exactly according to the latest version of this IEC standard. 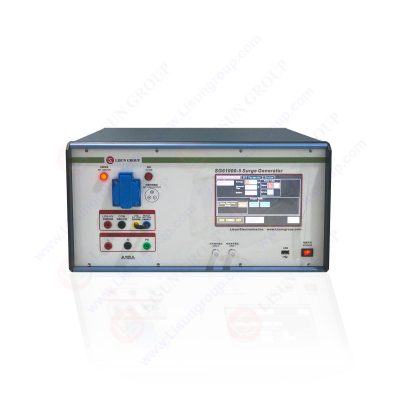